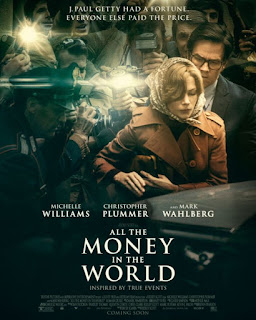 A Ridley Scott movie always presents us with a stylized make-believe world or period of actual history, almost always perfect in detail and beautifully filmed, and his latest is no exception.  In All the Money in the World, he gives us the true story (well, a very movie-ized version of the story) of the kidnapping of John Paul Getty, III, the grandson of billionaire oil magnate Jean Paul Getty, who was not only the richest man in the world, but at the time was the wealthiest individual in all of recorded history.  Accounts of Getty’s uber-miserly ways are so extraordinary that it doesn’t require much imagination to believe that the $17 million demanded for his “favorite” grandson’s safe return was simply out of the question. 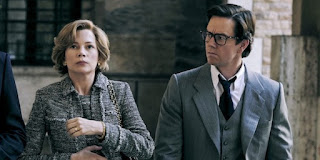 The movie’s plot centers on Gail Harris-Getty (Michelle Williams), Paul's devoted, strong-willed mother, who unlike the elder Getty (Christopher Plummer), has consistently chosen her children over his fortune.  Getty does assign his “fixer,” former CIA man Fletcher Chace (Mark Wahlberg) to do what he can to negotiate better terms for Paul’s release, and Fletcher and Gail find themselves in a tense, sometimes even hostile, partnership.  These three personalities have as much conflict between them as they as a trio have with the kidnappers, and the situation drags on so long that the original kidnappers actually “sell” their hostage to the local Mafia when they tire of the process. It makes me wonder if Rome in 1973 must’ve been something like the old Wild West, but with a lot more Vespas, fine wine and Communists around. 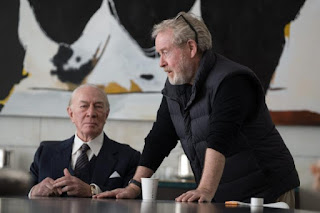 I am constantly amazed by Ridley Scott as a filmmaker.  Of course, he doesn’t hit home runs every time he makes a film, but it’s his skill as actually MAKING the things, even more so now that he’s breached the 80-years-of-age milestone, is almost beyond my ability to describe.  I defy anyone to point to any of his films and say it wasn’t at least a visual pleasure.  He is an underrated master of world-building, something essential when creating such historical epics as Gladiator and Kingdom of Heaven, or the sci-fi environs of Blade Runner and his Alien films.

It seems the only thing the general public knows about this movie is how Scott decided, on his own accord, to completely remove Kevin Spacey’s performance as the elder Getty from the film after it was already finished and ready for its world premiere last November.  In less than four weeks, he rebuilt sets, reassembled the entire cast and crew, wooed Christopher Plummer to take on the role of Getty, reshot twenty-two scenes (IN JUST NINE DAYS!!!) and ran all that footage through post-production and editing, in time for a Christmas Day release.

While the feat of movie-making skill Sir Ridley managed in re-tooling this film just blows my mind and increases my admiration for him, the resulting film as a whole is far from his best, and not even as good as some other, more pedestrian thrillers.  As I did after such films of his as The Counselor and Body of Lies, I wonder about Scott’s ability to truly judge a screenplay, as despite never being bored by the plot, I didn’t think David Scarpa’s screenplay provided enough highs and lows in the tension level to generate any great emotional payoff. 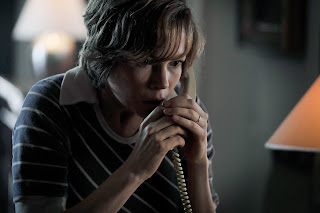 Michelle Williams as Gail Harris carries the film, and is very good in becoming a strange mixture of “nouveau riche” and “poor-but-proud,” all with a Long Island/Kennedy-esque accent and composure that keeps her character from coming across as a stereotypical panicked mother.  She is perfectly aware of how she is perceived to be so intrinsically linked to the Getty empire, but in a world in which money talks, the only hope she has of getting her son back alive is to enter into the Faustian schemes and plans Getty’s army of lawyers practice. 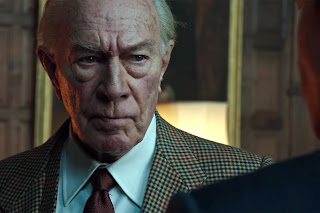 Christopher Plummer assuming the role of the elder Getty also probably made the movie even better than it would’ve been without him, as despite his callous, dead-on-the-inside actions, he relates a few things to us that show he was once actually a human being.   A performance that is all the more amazing knowing how little time he had to prepare for it, Plummer depicts Getty throughout the years, and there are some glimpses of a doting grandfather, but they’re all consumed by a lust for wealth that all too often comes at the expense of family.  Plummer elicits both disgust and pity from the audience in near-equal measure. 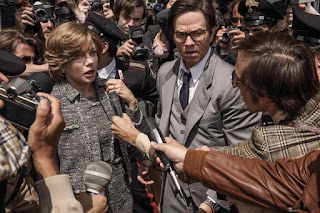 Mark Wahlberg, however, is woefully mis-cast in a part that demands an older, more grizzled man to properly convey the world-wise savvy and street-smarts his character supposedly possesses.  I’m sure the film’s financiers demanded a more bankable star like Wahlberg in the role to help ensure ticket sales, but I wonder if someone more everyday-Joe-ish like Paul Giamatti or Alfred Molina would’ve been more effective.

All the Money in the World won’t ever be mentioned in the ranks of great thrillers, but it does have a slow-burn type of dramatic intensity, all held together by at least two excellent pieces of film acting. It’s most impressive achievement to my mind, though, is to make me wonder if, given how Ridley Scott so quickly and effectively retooled his own movie at the last minute, wouldn’t it have been great if somebody had asked him to try and save Justice League…?
Posted by Larry Smoak at 2:07 PM