Did you see X-Men Origins: Wolverine seven years ago?  Do you remember Ryan Reynolds portraying a character named Wade Wilson in that flick?  Do you recall he became a mutated monster they called “Deadpool” in that movie’s final act?  If you don't, then it's just as well, because we can now just pretend all that never happened. God knows comic nerds across the land have been trying to do just that, and Ryan Reynolds himself has been doing his darndest to make amends for that abomination ever since.

So, what is THIS movie?  Is it a Superhero movie?  Is is a love story?  Is it an Action/Revenge flick?  The short answer to all of these questions is “yes.” In the sense that the title character has appeared in various Marvel titles for the last twenty-five years, it’s a “Superhero” movie.  In the sense that we’re shown two seriously screwed-up individuals have a stereotypical movie “Meet-Cute” (as far as a disgraced mercenary and a prostitute can have a “Meet-Cute”) and realize they were meant for each other… and we as an audience actually buy into it, it’s a love story.  In the sense that a “British Bad Guy” kidnaps said girl and our hero will maim/mutilate/dismember/kill countless henchmen along the way to rescuing her, it’s an Action/Revenge movie.  Most of all, in the sense that Deadpool is a character that requires someone who is good at talking trash to play him, and Ryan Reynolds can certainly talk trash with the best of ‘em, then it’s a comedy… and possibly one of the raunchiest comedies you might see this year. 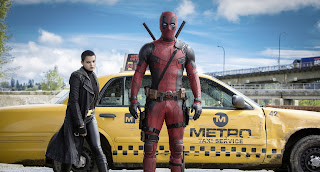 If any actor was ever born to play a certain role, Ryan Reynolds was born to play Wade Wilson, a former Special Ops soldier who, after being dishonorably discharged, becomes a mercenary, but has fallen to such menial work as protecting a college girl from a stalker. Wilson soon meets the love of his life, Vanessa (“Gotham” and “Homeland”'s Morena Baccarin), and the two find giddy teenaged-type raunchy happiness in each other until Wade is diagnosed with terminal cancer.  Rather than subject her to a life of having to watch him waste away, he disappears, but is found by a mysterious man from the same Weapon X program that produced Wolverine. This man in black (or “Agent Smith” as Wilson dubs him - rewatch The Matrix if you must) offers him a chance at curing his cancer while also gaining superpowers by means of procedures that involve extreme amounts of torture at the hands of the combination mad scientist/bodybuilder supervillain Ajax (Ed Skrein from Transporter: Refueled).  Wilson does have his cancer cured and does gain superpowers, mainly, the ability to heal himself from any wound, but it also permanently disfigures him.  After Wilson escapes the Weapon X program by blowing up the building and waiting while it burns down around him (he can heal from anything now, remember?), he assumes the name Deadpool and vows to find Ajax and have his revenge.  Pretty simple, right?

Produced on a shoestring budget of $30 million (well, “shoestring” when compared to most other hundred-million dollar movies in the genre), Reynolds as producer and director Tim Miller take advantage of the lack of resources by having only two major action sequences and focusing on Deadpool’s acerbic personality, the very trait that has most endeared him to comic readers.  I can’t help but think that 20th Century Fox must have been collectively thinking, “Hell, we’re not giving them any real money, so let ‘em do whatever they want.”  After forty-plus years of watching movies, it is rare that I see something in a film that I haven’t seen in some shape or form before, but Deadpool provides that the instant the lights go down.  The opening credit sequence contains snarky descriptions that many a cynical moviegoer has said in his own head while reading credits before, but never actually seen written on screen.  Suffice to say that any director who credits himself as “Overpaid Tool” and his star as "Some Douchebag" has earned a little respect from me. 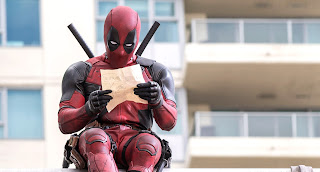 Oh, sure, the framework of Deadpool is pretty stereotypical, in that we have the wise-cracking Best Friend (T.J. Miller, no relation to the film's director), the love interest, the afore-mentioned British Bad Guy, and a plot that doesn’t vary much from a Charles Bronson revenge yarn. What sets Deadpool apart is that it is a hyperactive, almost ADD-riddled exercise in fanboy-made cinema, and I don’t mean that as an insult. Deadpool is the superhero character (a term used very loosely in this case) you've never seen in one of these movies before, as he breaks the "fourth wall" a la Ferris Bueller on several occasions, addressing the audience directly, acknowledging the movie he’s in and even pointing out some of the tropes we all assume we’ll see in other superhero-type flicks.

The insertion of a couple of X-Men trying to get Deadpool to temper his murderous ways throws yet another change in the mix, and also establishes that this story is set in the same universe as Fox’s other X-Men movies. Knowing this extremely R-rated story is taking place in the PG-13 world of X-Men: First Class and X-Men: Days of Future Past makes some of Deadpool’s in-jokes and asides all the more hilarious (“I just can’t keep up with all these changing timelines!” he even quips at one point). 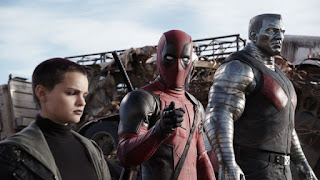 There’s no doubt that Deadpool is not for everybody.  If you love Ryan Reynolds in a way that drove you to buy multiple copies of that People magazine that named him “Sexiest Man Alive” a few years back, then you may think this movie is for you.  It may not be.  Then again, you may be deranged enough to enjoy it.  I happened to think it was a tremendous, riotous hoot, but there’s no way I can tell you for sure what your take might be.  I’ll merely provide this bit of advice - this movie ain’t exactly Van Wilder with a mask and swords, but it’s sure as Hell not the Deadpool we were given in X-Men Origins: Wolverine.  You can decide for yourself what to do with that assessment.
Posted by Larry Smoak at 4:57 PM No comments:

Friday night at the movies finds the wife and me going to see Hail, Caesar!, the latest offering from the Coen Brothers.  I’m not one of those who worship at the altar of Joel and Ethan Coen, but I’ve enjoyed more of their works than not, and the marketing for this one was funny enough to evoke thoughts of Raising Arizona, so I was really looking forward to this one.  It’s apparent that Hail, Caesar! is intended to be something of a “love letter” to Old Hollywood, and in that respect, the Brothers have pulled it off.  Sadly, they didn’t succeed at much of anything else. 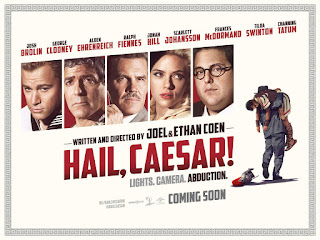 Their screenplay gives us Eddie Mannix (played by Batman-jawed Josh Brolin), who in reality was an executive at MGM through the forties and fifties, working as a “fixer,” addressing the scandals that followed their stars around and doing his best to maintain the facade of wholesome people making wholesome entertainment for the Eisenhower generation. Oh, how times have changed… This fictional Eddie marches all around production at the fictional Capitol Studios, starting every day in confession (where the priest even tells him he comes entirely too often), trying to stay morally upright in a morally bankrupt industry.  He then deals with drunken starlets, snippy gossip columnists, a demanding-but-never-seen studio boss, and a pregnant-out-of-wedlock actress in one morning.  The afternoon brings news that the star (George Clooney) of the studio’s big swords-and-sandals prestige production has been kidnapped by communist screenwriters (it IS the early fifties, after all) seeking bigger cuts of the monies their writings produce. 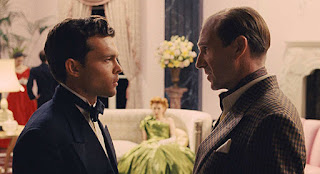 The movie follows enough disparate plotlines to allow the opportunity to revisit several different film styles of the early fifties, and the Coens pull off all of them. Gene Autry-style Westerns, Esther Williams-style swimming spectacles and black-tie teacup dramas all have homage paid to them with sly wit.  The work done by their production designer Jess Gonchor, costume designer Mary Zophres and legendary cinematographer Roger Deakins is outstanding, totally convincing me this world actually was Hollywood in its heyday of the 1950s. The myriad of quirky characters all represent some genre that studios of the day cranked out in their assembly-line fashion, and the witty dialogue they speak are entertaining in their own way, but the downside is that it seems their focus on recreating this world and being faithful to it kept them from crafting a more gripping story.

Just one example is the impressive Anchors Aweigh-type dance number mid-way through the film, which plays as perfectly as if Stanley Donen were staging it for Gene Kelly and Frank Sinatra.  Channing Tatum taps and jumps and glides and sings throughout the number, proving he might very well have been a bigger star back in that day than he is today, but once the number is over, it’s over, and serves no other purpose in propelling the story… or what little story there is.

The Coens seem to have come up with a series of bits and matched all of them up perfectly with the members of their “repertory company,” but aside from Clooney, and perhaps Alden Ehrenreich as the cowboy actor Hobie Doyle, all of these names you see listed above the title on the movie poster are mere cameos.  Scarlett Johansson, Jonah Hill and Frances McDormand all have a mere one scene each, and none of the three seem to do anything that relates to the underlying plot line of the Clooney character’s kidnapping. 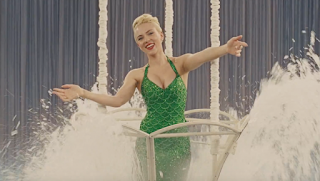 Sadly, this movie is also yet another victim in the trend of movie marketing giving us all the funny bits as a means of drawing us is, but not leaving any for us to discover once we’re in the theater.  A sequence showing exasperated director Laurence Lorentz’s (Ralph Fiennes) attempts at getting a dense actor to deliver a line properly was featured in the film’s second trailer, and while the painful coaching the director gives is hilarious, it’s also probably the highlight of the movie’s laughs. Lots of other one-liners fall flat, as do pretty much all of George Clooney’s myriad of Elmer Fudd-like facial expressions. 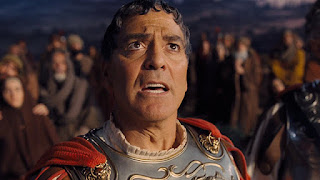 The tone, the mood, the visuals were all spot-on, but I kept waiting for the story to get deeper.  It never did. Okay, the Coens want us to get the joke when they name the Carmen Miranda-type character Carlotta Valdez, and fans of Hitchcock probably will, but is that sort of thing enough to build a movie’s plot around? Hail, Caesar! is a great idea for a movie, and even a great starting point for a movie, but not one that became a great movie.  A “meh” one, perhaps, but after such works as Inside Llewyn Davis, O Brother Where Art Thou? and No Country for Old Men, we expect better from the Coens, or at least something more engaging.

Posted by Larry Smoak at 7:47 PM No comments: