The "Spectre" of Bond films Gone By...

I said in my review of Skyfall that I’ve never viewed the Daniel Craig Bond films as a strict continuation of the Bond franchise.  Producers Barbara Broccoli and Michael Wilson stated that Casino Royale was a reboot of the property, and I’ve always taken them at their word and mentally separated these movies from their predecessors.  It took a while for me to find a place in my consciousness for the Craig-era films, though, as they most certainly don’t take place in the same world as the first twenty movies.  The now-four films of this series occupy a different place for me than do the six Connery films, the seven Moores or the four Brosnans (I sorta tack on the one Lazenby flick with the Connerys, though - it was that good). 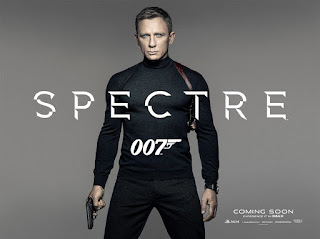 While I have thoroughly enjoyed the Craig films (yes, even Quantum of Solace - it’s grown on me over the years), none of the first three has quite felt like a “Bond Movie” to me, although Casino Royale came pretty dang close.  Spectre, however, has the “feel” of a Bond movie for me.  It has the patterns we expect of a Bond movie - the pace, the rhythm.  The gun-barrel opening is here, for the first time in the Craig era.  There’s a journey by train (and one hell of a fight), a la From Russia, With Love; a mountaintop health retreat, a la On Her Majesty’s Secret Service; a 1948 Rolls Royce appears out of the desert, a la Goldfinger. All of these winks to Bond’s past (and a few others) pop in and out of the plot, but director Sam Mendes and his screenwriters, all back from Skyfall, wisely don’t shove them in our faces. 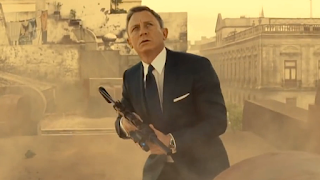 The pre-title sequence is a seemingly one-take, Touch of Evil-ish scene through the streets of Mexico City during the Day of the Dead festivities, leading to a three-way fistfight in a helicopter above a crowded city square.  It seems there’s yet another shady criminal organization trying to take control of the world’s intelligence services, one with which Bond has been unwittingly crossing paths for three movies now, and this ring carved with an octopus is the clue Bond has been needing all this time. Through real-world Snowden-like dealings in the British government, the 00-programme is on the verge of being shut down, so Bond is once again on his own, off to Italy to infiltrate what seems to be the secret society’s annual shareholders meeting and have a fantastic car chase. Then off to Austria to collect the required female adventuring companion, one Madeleine Swann (Lea Seydoux), and ultimately to Tangiers in pursuit of the everyone-says-he’s-dead Franz Oberhauser (Christoph Waltz, looking quite like Charles Gray and dressed remarkably like Donald Pleasence… hmmm...) in his secret desert hideout.  Now if all that doesn’t sound like a Bond flick, just what the heck would? 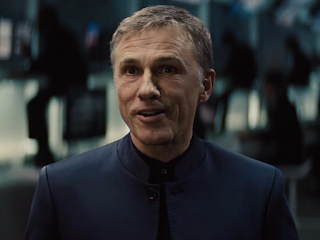 Spectre’s almost two-and-a-half hour running time didn’t phase me, but despite all of that screen time, there are characters that are sadly underdeveloped or underutilized.  Monica Bellucci, whose casting was much ballyhooed by the press as being novel, in that there was finally an age-appropriate actress as a “Bond Girl,” is in-and-out of the movie fairly quickly, and the sequence with her character almost so unnecessary to the plot that one might forget about her once it’s over. While M and Q (Ralph Fiennes and Ben Whishaw, both fantastic) are involved in this story better and more entertainingly than any incarnation of those characters ever has been before, Naomie Harris’ Moneypenny is sadly underused, a disappointment after the potential for growing her and Bond’s relationship at the end of Skyfall.  Even the almost-obligatory scene where the primary baddie has Bond in his clutches falls prey to the spy-thriller trope of the monologue-ing villain, leading me to hear Seth Green in the back of my mind, screaming to Dr. Evil in the first Austin Powers movie to just pop the hero in the head so we could get on with things. 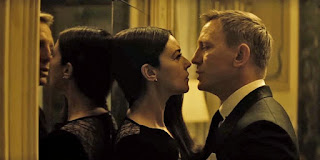 Spectre is not a letdown after Skyfall by any means, but it is a different movie, and one should keep that in my when buying his ticket. It is not as in-depth as Skyfall, but it is more fun, with Bond exhibiting a bit more of the dry humor we’ve loved from the character these last fifty years. Craig actually seems to be enjoying the character more than he ever has before, although you’d never suspect that from all the public griping about being Bond he’s doing to the press these days.  I once complained that his portrayal of the character was more James Bourne than James Bond, but the part has evolved in these last two movies, and he in the role, turning it into something more familiar, yet all his own at the same time. 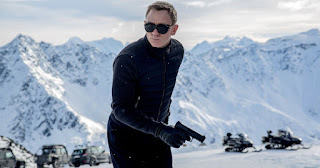 If you go to this movie basing your expectations on your experience with Skyfall, you may be disappointed, so don’t fall into that line of thought. Spectre seems to be more about the tone of Bond’s world than the particulars of any story set in it.  It has a different pace than Skyfall because it tells a different story, about a character in a different place in his life, and yet it’s still exactly what you should expect of your Bond flicks - an extraordinarily entertaining action/fantasy thriller, and one you’d be glad you saw in a theater.
Posted by Larry Smoak at 10:56 AM No comments: